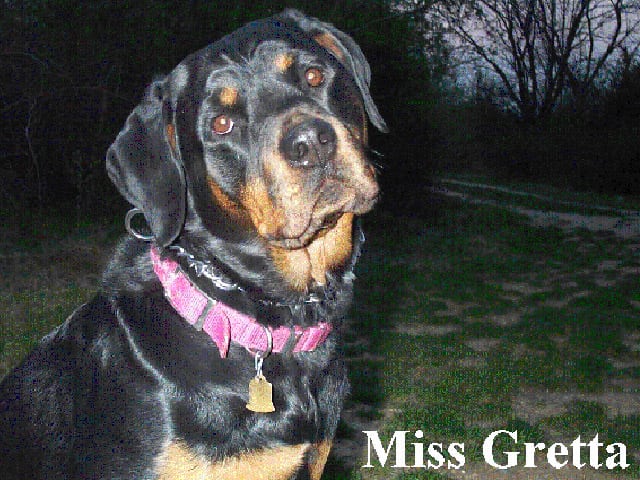 Last summer, our friend Jami told us about about “cisplatin biodegradeable beads,” an experimental type of chemotherapy treatment being tested in dogs with bone cancer, who are undergoing limb-sparing procedures instead of amputation.

These biodegradeable beads are being implanted at the time of the limb-sparing surgery, with the goal of preventing tumor regrowth in the leg, through a gradual release of cisplatin, a chemotherapy drug. This type of treatment can possibly reduce the recurrence of tumors in dogs who have had limb-sparing surgery instead of an amputation. An article in the Annals of Surgical Oncology describes the treatment.

Jami wrote to tell us about her dog, Miss Gretta, who underwent the implant surgery at age 12. Jamie has generously offered to explain the procedure, and wanted to share Gretta’s progress with Tripawds.

Cisplatin biodegradeable beads have recently been approved for use in smaller animals (see Royer Biomedical).

The cisplatin beads are useful for solid mass tumors in tissue (such as nerve sheath, muscle, skin) which can be surgically removed, and then the beads prevent the regrowth of the cancer at that site. The beads have been tested specifically in spindle cell tumors (nerve sheath), sqamous cell (skin), melanoma (skin) basal cell ( skin), and a handful of other solid mass tumors.

Gretta had spindle cell tumor (the originating tissue was likely a nerve sheath)… the tumor was about the size of a grapefruit at the time it was removed.

Previously used in horses, these beads can be surgically implanted after removal of certain types of cancers, and provide release of chemotherapeutic agents directly into the tissue. Since this allows the concentration of drug to be highest at the site needed to attack the remaining cancer cells, this is an effective way to treat cancer without exposing the dog’s entire body to high concentration of chemotherapy.

Ultimately, there may be less side effects related to the chemotherapy, and a greater reduction in cancer cells at the site of the tumor removal.

There is little publicly available related to dogs, either on their website or on the internet. I do understand that they have just recently been approved for the smaller animals, and their representatives are starting to talk with veterinarians. It is an expensive treatment, but for certain types of neoplams, it is life and (in our case) limb-saving. We hope, at least.

Here is a technical presentation on their website, related to horses.

Gretta came through the surgery just fine….we’ll bring her home later this morning. She required 32 beads, which is a record right now. I spoke with Dr. Royer himself yesterday morning (he is the PhD who invented the Cisplatin bead), and he gave me some information that I will summarize.

Apparently, there has been a large study in California; 80-100 small animals (mostly dogs, cats) that have received the treatment with tumor removal. They have had a 90-95 percent success rate, with only one case of tumor regrowth. In general, these are results that are typically not seen in clinical trials, so with that said, it is a very viable option.

While the Cisplatin is a very potent anti-tumor drug, the delivery system places it right on the tumor site and thus requires a fraction of the medication that would be given through more traditional methods (by mouth or through injection).

To put it in perspective, if every bead released every drop of medication at once, it would be less than *one* oral/intravenous dose of cisplatin previously used in treatment for animals. The release of the capsules is 4-6 weeks, just to add to the safety picture.

Dr. Royer mentioned that they have just completed the small mammal study and will be taking this information out in this seasons’ round of veterinary medical meetings, and this fall to the Vet schools. He personally had come to the Surgical clinic where my dog was to undergo amputation because it is one of the larger and more reputable centers on the East coast. I did know before I had called him, but he had personally consulted on my dog with the surgeon. What a stroke of luck!!!

She is a record… 32 beads implanted in a dog. The most that has ever been done in total is 40 in a horse. (Gretta is a petite Rottie at 82 pounds…still not the size of a horse!!!). My surgeon has another Great Dane scheduled tomorrow, so he’s getting a handful of experience this week!

Lets see how Gretta recovers… she’s still got some recovery over the next 2-3 weeks.

Just a quick update. Gretta is recovering from the surgery, but has some post-op complications with infections. She is 16 days out, stable. Her prognosis is good, but right now she is still limited in her mobility, and we are challenged by managing her with the open wounds and infections from the surgery. Still, a huge difference from loss of a limb, but it has been challenging.

We had a bit of a set back. Gretta had pretty serious infections following the surgery, and about day 14 she became immobile and non-responsive. With all that said, we were able to pull her through just fine. She did develop MRSA (which is an antibiotic-resistant infection). She required 30 plus days of antibiotics, and Day 14-28 she was on 4 antibiotics, including treatment for the MRSA. Dogs don’t get MRSA very often, so I had to convince my vet to treat the MRSA (he wanted to wait to get cultures for 5 days). I believe if we had waited for the culture to come back, we would not have Gretta with us right now.

With all that said, she is now post-op 90 days, and is recovered from the surgery. The next test will be whether the tumor comes back.

We’ve been holding off to see what the real outcome of the surgery will be…. while it saved her leg, the real issue is whether the tumor comes back.

She has follow-up in a few weeks. We do think there is already something that might be growing back, however, we should have the vet check it before we say it is the cancer.

The overall surgery and follow-up cost about $4,000.00…. not too much for a dog you love, but if the beads don’t prevent regrowth, then we are back to the reality of removing the leg. She almost died once in the post op period (as my note says below). If I weren’t a medical person, with access to high end infectious disease consultation, she would have died.

The real outcome is prevention of regrowth, and we are still watching her closely.

Jami, thanks for sharing your story. We wish Miss Gretta a full recovery, and give she and Jame “paws up!” for participating in this new treatment, which we hope will continue to help more dogs affected with osteosarcoma.

2 thoughts on “Cisplatin biodegradeable beads save Gretta from amputation”