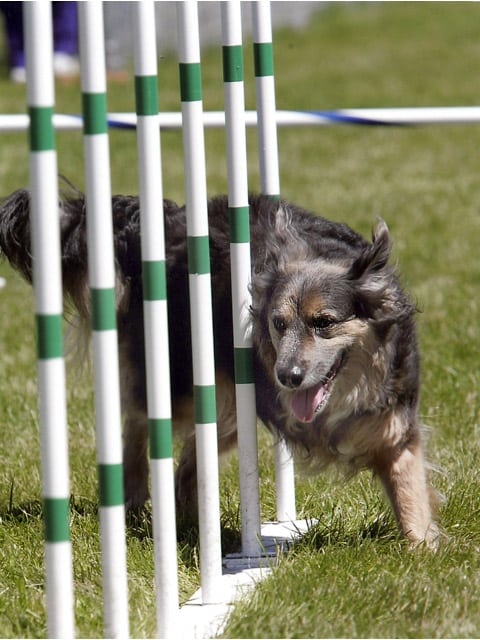 The following Guest Blog Post was generously written by Amy Breton, a Tripawd pawrent from Massachusetts. To submit your own guest post to Tripawds, contact us today.

I first met Serena when she was brought into my veterinary clinic as a hit-by-car stray dog 10 years ago. No one ever came to claim her, so I adopted her. She needed 8 surgeries to fix her (broken pelvis, torn cruciates, broken femur, hip luxation). That’s not how she lost her leg. At that point she was about 1 year old. No one thought she’d walk let alone do agility. She proved them all wrong.

Every dog owner questions whether amputation is the right thing to do. In Serena’s case I knew she would be okay afterwards, but I worried I had lost my agility partner. Two months after her amputation she was back competiting, and winning. To date Serena has one championship title and is currently working towards her second. She is, as far as anyone can tell me, the only three legged agility dog in the country.

Serena is also a registered therapy dog and when she’s not doing agility she’s making the elderly and kids smile. There are many adults and kids she meets with limb amputations that can relate to her.

Serena brings inspiration to everyone she meets. She has never let anything get her down. I once had a father and son ask me about Serena right before an agility competition. While waiting near the start line I gave them the abbreviated story. As I stepped out into the ring for Serena’s run I heard the father turn to his son and say “You see that dog out there? Whenever you say you can’t do something you think about that dog.” He’s right.

She is also my inspiration as well as my furry-kid, my friend, my laughter, my sanity at times of insanity and my partner out on the agility course.

To see videos and more pics of Serena, visit her MySpace Page.

2 thoughts on “Tripawd Agility Champion Serena Brings Inspawration to All”