Three legged dog Max shows us hope and courage even when faced with amputation and bone cancer.

Tripawds.com looks back at our three legged bone cancer and Tripawd warriors’ good times in 2010.

Help Tripawds community raise funds by buying Doug Koktavy book “The Legacy of Beezer and Boomer, Lessons on Living and Dying from My Canine Brothers.”

Three legged tripod dog hero Jerry G. Dawg tells how his pawrents learned to cope after his death and welcome another puppy into their life.

Three legged amputee bone cancer dog Jerry tells how his people learned to heal from grief and love life again after his death from osteosarcoma. 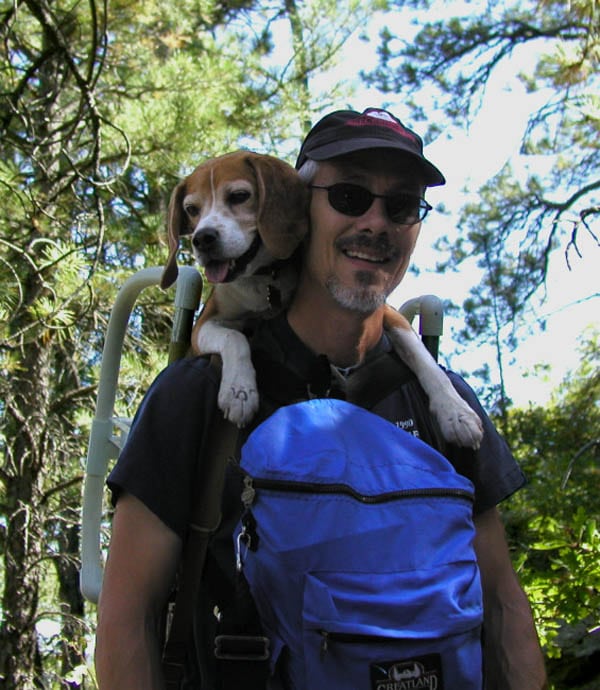 Here’s another touching story we learned about, after we were featured in the PBS show, Why We Love Cats and Dogs.

Greg Hess, a viewer from Colorado, wrote to us and shared his story about a deep  commitment he made to his senior dog Stormy, whose health was in rapid decline at the same time that Greg lost his job. Greg and Stormy’s story is so beautiful, we had to share it with you. He writes:

I am truly sorry for your loss. What great Being Jerry was for everyone he came in contact with. I feel that your story has a very significant message too. That is, your commitment to Jerry in his time of need. Your willingness to do what it took to give him a life that many animals will never know.

I concluded in much the same way, that my own dog needed that kind of commitment. About a year and half ago, I lost my job. While thinking about the next move, I wondered how the next job would impact my our 14 ½ year old Beagle, Stormy. It dawned on me that since both my spouse and me would be gone all day, his life would mostly be just laying around being board. And in Colorado, it’s dark and cold for many months so trying to get out for a walk at night wasn’t very promising.

It wasn’t easy to commit to that. Even with the support of my spouse, losing income and one’s place in the work world presents some difficult hurdles to overcome. But the life we were able to provide Stormy for those 18 months was incredible. He went ‘everywhere’ with me. People new him from one end of the city to the other. He ate with us, walked with us, slept with us, there seemed to be no reason to exclude him from anything in our lives.

We had to have Stormy euthanized in January 2009. Like you, as his health declined, it became clear from our vet visits, that there were too many unknowns about his condition, which was probably a brain tumor or, the beginning of kidney failure. So we decided to just do everything possible to make his life good until it was time. I simply couldn’t put him through massive testing, prodding and poking to gain a couple of days or weeks.

So a grateful thanks for sharing your story. It’s really felt like I’ve been out on the fringe of society by taking off so much time to be with Stormy. His passing (as I’m sure Jerry’s did) has left such a large hole in our lives. I guess the more time one spends, the more threads we interweave between our pet’s lives and us. Perhaps it’s an unfortunate byproduct of losing Stormy, but it’s created a profound sadness in me for all the other Beings on our planet that will not come close to experiencing what dogs like Jerry and Stormy had.”

Here is a beautiful essay Greg wrote about Stormy: